Automated UI Testing: Do You Need It or Can You Do Without It?

Most user interface testing processes are tedious, time-consuming, and fallible, especially when done manually. You probably dread most of them.

Because as customers evolve, so does the unpredictable need to change your application requirements. Over a protracted period, these changes become repetitive, and the testing process becomes more complicated.

But what if you could simplify or automate bulky and repeated tasks?

All software development teams have similar desires: better software quality at a lower cost and shorter time. According to a 2017 study, increasing the quality of software or product and reducing overall application cycle times by reducing made up 41% and 35% of executive management objectives in QA and Testing.

Here's a clue: If you can automate or streamline something, you should. For each user interface testing you perform, ask yourself why you do it, and how to do it quicker.

Keeping up with what functionality in your user interface that you should be verifying or validating can be exhausting. But automating your tests and leveraging usability testing services make your job a little more painless. You and your team can focus your time and attention on other efforts that drive revenue.

So, what is automated UI testing? What are its benefits, and when do you switch to automated UI testing? Can one perform UI testing without automation? Are there pitfalls of automating user interface testing? Experts at UTOR will answer just that in this article. But first, consider skimming through When to Go for Automation and How to Avoid Common Mistakes.

What Is Automated UI Testing? 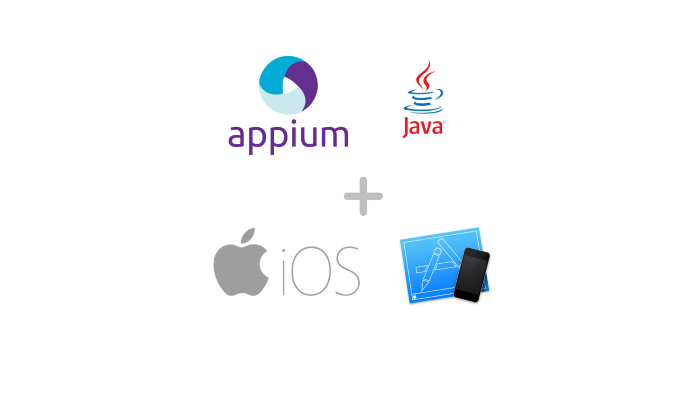 To understand the concept of automated UI testing, you first need to understand what UI testing means. User interface testing is a test process to gain an insight into how well an app works. The purpose is to figure out the potential areas of frustration for its final users and ultimately improve its quality. In essence, UI testing covers the following:

Automated UI testing is a process that enables technology to take over repetitive UI testing tasks from people. Automated testing is essential to ensure shorter release cycles and a minimum baseline of quality. Even though manual testing has its role to play, if you're spending time delegating processes that can be automated, you're wasting time. When you waste time, you lose cash and competition. That is why you should manual test only if exclusively needed.

Can One Perform UI Testing Without Automation?

One way to test the user interface without automating it is to select a human audience to use the app and report its performance. This is the manual approach.

The other way is to think like this: we don't need another UI testing: we only made a slight change to the code that won't cause impediments.

This is the so-called ostrich approach that assumes that everything is perfect; that even adding new functionalities can't adversely impact software.

What Are the Possible Results from Using These UI Testing Methods?

In the first instance, let's say we built software and spent four months to rally people to try it.

Nothing went wrong, and we eventually launched the app. After several months, we update the same app with extra features, and now we have to retest the user interface for any misbehavior.

It would mean spending additional months to bring together ordinary users to rerun the app. This is a problem in many ways:

The second instance is simply a careless decision for obvious reasons. The app could regress and cause defects, leading to total software failure. This method of testing may also explain why some apps become buggy soon after a new version release.

Let’s try to highlight the times UI  automated testing will be better for companies, and subsequently discuss the primary and secondary benefits of performing it.

When and Why Do You Switch to Automated UI Testing?

Here are vital triggers that signify switching to UI automation systems is the right decision.

In 2017, top positive outcomes of test automation recorded by organizations were better detection of defects (60%) and better reuse of test cases (57%). Suffice to say that the fuss and preach about the continuous need of automation cannot be overstressed. Below are primary benefits of carrying out automated UI tests.

Ever wondered why some apps get installed by many users, whereas some remain underutilized? The basic reason is poor software quality.

End users want something simple to use and wickedly efficient software that provides a seamless experience. This is qualitatively true for software of very high expectations. The better the quality of any software, the more users will value it.

Another benefit of automated testing of the user interface, which has been mentioned, is the number of tasks delivered under a prescribed period. If the scope of testing UI is too broad or if the projects recur sprint after sprint, then it makes sense to create standard testing scripts using automation tools. This advantage, hence, reflects the quantitative benefit of automated testing.

The deal with building software is ultimately about how much money it rakes in ― or costs the organization. At first, the time and cost of setting up automated tests may be longer than expected, mainly because teams need to adjust to new ways of doing things. But over time, it becomes less expensive, requiring shorter time to execute than manual tests. Overall, time and cost-effectiveness will be better for teams that implement automated testing than those that don't.

Automated UI testing finds errors, defects, and bugs that threaten absolute software performance. It's essentially an avenue of asking prospective and existing customers what improvements they want to see'. In the Ostrich approach of user interface testing, neglecting to test altogether is vicious to the success of businesses.

When testing is done manually, some errors and bugs may be introduced to the system. But with automation, detection, and curation, even minor errors and bugs is feasible, as machines follow the same processes.

Let’s get to the secondary benefits of automation testing

1. More Testing Features for the Team

More features are deliverable from An automated test suite. Let's imagine simulating millions of virtual end users interacting with your software to figure out its performance. Manual testing tools lack such properties, making it impossible to mirror similar behaviors explicitly. Good stuff like this helps testers to save more time.

The critical element of every testing is what you can make of it — transparency. UI testing done automatically equally generates automatic, fast reports so that teams can share as soon as the sprint ends. Manual testing takes meticulous efforts and a longer time to derive results and reports.

Using the same tools and scripts for automation tests over and over again is a plus. This way, testing becomes more straightforward, and testers are better motivated to perform tasks.

What are the Disadvantages of Automation Testing?

Another Capgemini study in 2017 showed that challenge with test data and environment availability (42%) was the prominent struggle companies faced in achieving the desired level of test automation implementation. 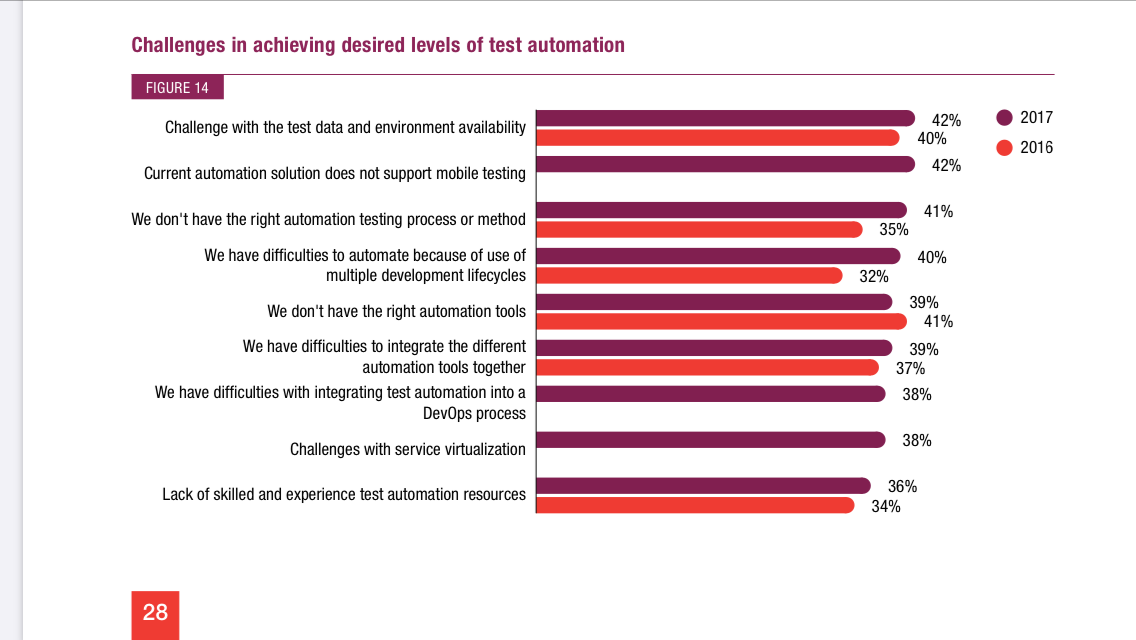 Of course, merits don't come without demerits, and UI automated testing has a few more. Let's explore them deeply – and find out other reasons why QA teams don't automate everything at once.

To integrate, deploy and implement automation testing tools in the enterprise, the organization must have the knowledge of the current automation advancement and technologies as well as its shortcomings. According to Capgemini and Sogeti 2019 findings, test automation's limited use is one of the main bottlenecks in QA.

Companies require specialists to identify the roadblocks in the deployment process. Skilled human resources are expensive and rare in the current marketplace. Hence, small and medium-sized enterprises fall short of their tight budget to bring in the manpower according to the requirement of the project.

2. Automation Testing is Not a One-size-Fits-All

Autotests also can't be applied everywhere because some software tests can't be automated. For example, when we carry out UI tests, installation tests, and API tests, we forgo automation as their test requirements are much different.

Besides, UI automated tools can be duped or confounded by events they haven’t seen before. A machine laboriously trained to conduct one task has to be taught all over again to do something else.

These landscapes can be long-winded in setting up, though some software testing companies usually specialize in this and, to some extent, can copy standard landscapes between clients. Also, more advanced technology using ML allows these landscapes to be determined automatically.

But if your team does not have access to the right tools or frameworks, then automation can create daunting effects in many ways.

One of the most significant risks inherent in using automation software is that it can lead to oversimplification. Oddly enough, most bugs are found by accident or during exploratory testing because each testing period is essential to check the system in different ways.

A small testing project can be defined as a short timeline – up to 6 weeks, or as having only one or two deliverables. Among the disadvantages of running user interface testing at the expense of human factors is the cost-timeframe relation. You will need to invest reasonably in technology before welcoming positive results. Usually, the development team puts together the cost of writing and maintenance of testing and testing environments.

However, the aim of cost-effectiveness is defeated if the project is meager or never-done-before or if the deliverables are concise. Because the budget for smaller projects hardly covers the automation testing needs and when it's a new task, the testers may have first to write the test scripts manually.

There's no arguing the need for automated UI testing, probably, for every mobile app and web development company. What's more is the need to run, as much as possible, error-free testing in each case. However, we also do not recommend automation for every testing. Manual testers cannot be replaced: it's always better for teams to employ both testing methods. Finally, we encourage mobile app and web developers to incorporate the selling strategy of 'Always Be Testing.'