Test Automation Framework ― Guide on How to Implement It

A test automation framework is a digital environment that contains various tools, programmable functions, and operating systems, all geared towards conducting automated tests on software.

According to Harvard Business Review, at least 1 in 2 CEOs believe that AI’s bottom line is really about improving the functions and performance of products. TechBeacon goes further by highlighting AI automation as one of the five biggest trends in software testing.

Successful automation testing requires highly intelligent systems that can make autonomous decisions. They should be systems that require little human intervention and supervision. Thus, such systems’ framework must be well equipped with bits of Artificial Intelligence, human-machine interaction, and Big Data management.

But you may wonder: why do I need a software testing framework? A test automation framework is just as important as a test automation strategy. Without the right framework, an automated test could easily fall apart. First of all, the test would be incomplete or would not even commence. Secondly, the software itself might get damaged because the automated test could administer the wrong test to a particular function or section of the software. It is with these reasons in mind that we always implement frameworks as part of our automation testing strategy.

As such, let’s discuss the six most common test automation frameworks, which we use for various types of software. These six framework designs can be used on any software, no matter how simple or complex they might be.

How Do You Implement Linear Automation Frameworks? 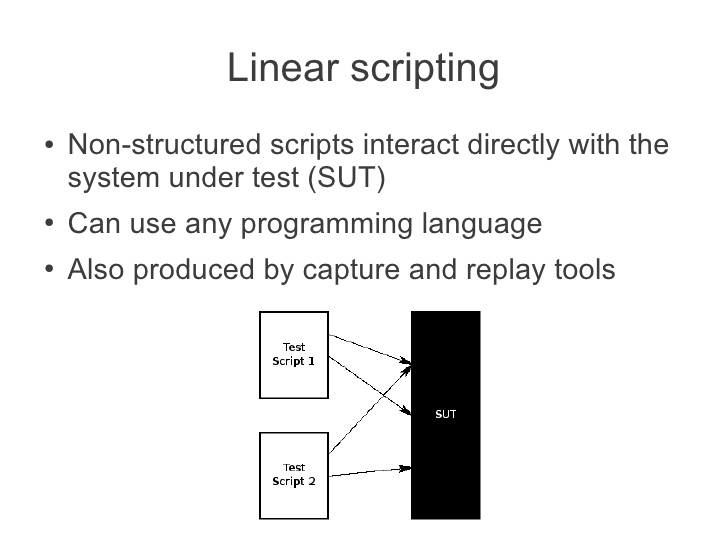 The linear functions do not skip any test sessions but follow-through from the beginning, which is usually a session of unit tests, up to the end, which is typically a session of operation and system testing. It is a very straightforward framework that requires no knowledge of writing codes to use it. It's strict sequential order includes it among the fastest test automation frameworks available.

Linear automation framework is commonly used by those who have little or no experience of automated testing techniques because it is more suitable for such people. All they have to do is to deploy the software into the testbed and monitor the framework take effect.

However, because of its rigidity, some types of changes cannot be made during the process. The linear automation framework has to first come to an end to make any corrections or adjustments within the software build. Thus, this framework is not as flexible as the rest.

The modular based framework divides the software being tested into various parts before the test is carried out.

How Do You Implement Modular-Based Testing Framework? 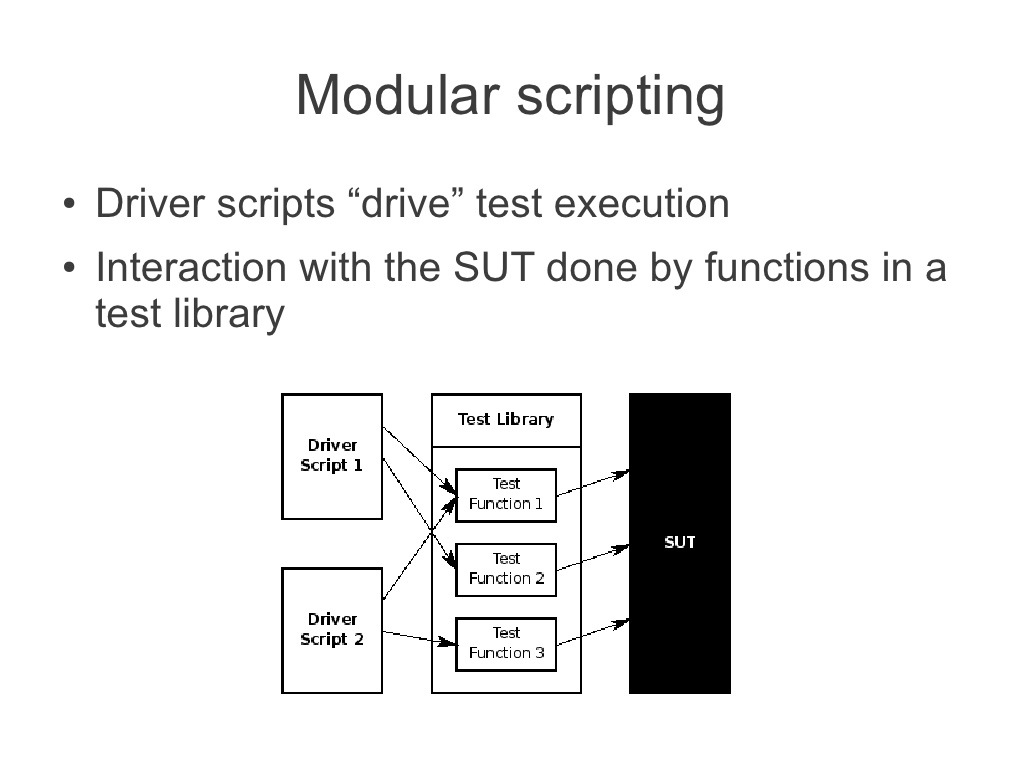 Most times, the human tester has to be the one to segment the software into different functions before deploying it into the modular-based framework.

Before the deployment, the tester also has to readjust the framework by categorizing it into sessions that will fit each software function. This categorization means that the tester has to be someone who is well knowledgeable in coding and programming.

A tester must understand the lines of codes that make up the software to successfully break software down into different sections based on their functions. Some lines of codes represent each function. Then they will be transferred as scripts into the section of the modular-based framework that will be testing them.

A significant advantage of the modular-based framework is that corrections or adjustments can be made easily by merely isolating the codes representing it. The modular based framework is, therefore, categorized as a flexible framework.

How to Do You Implement Library Architecture Testing Frameworks?

The software being tested will be segmented just like during a modular-based testing framework.

However, the various segmented functions will have to be grouped according to their functional similarities. For instance, the logging in and logging out functions of the software will be grouped.

Just as its name implies, it resembles a library, such that each function can be located based on the group it falls under, just the same way you could find books on fundamental and complex chemicals under the "Chemistry" section of a library.

To use this testing framework, one has to be very good with coding because the various functions of the software have to be deployed as scripts, and the framework itself has to be programmed into the desired groups of functions that make up the software.

This type of testing framework creates a separation between the codes that make up the software and all the software's data.

Unlike the other testing frameworks we have explained earlier, a Data-Driven framework makes it possible to test software with or without the database associated with it.

This framework helps testers to know the actual effects of little or big data on the software. The data is stored in an external database while the software is deployed bare, without any data.

How Do You Implement Data-Driven Testing Frameworks? 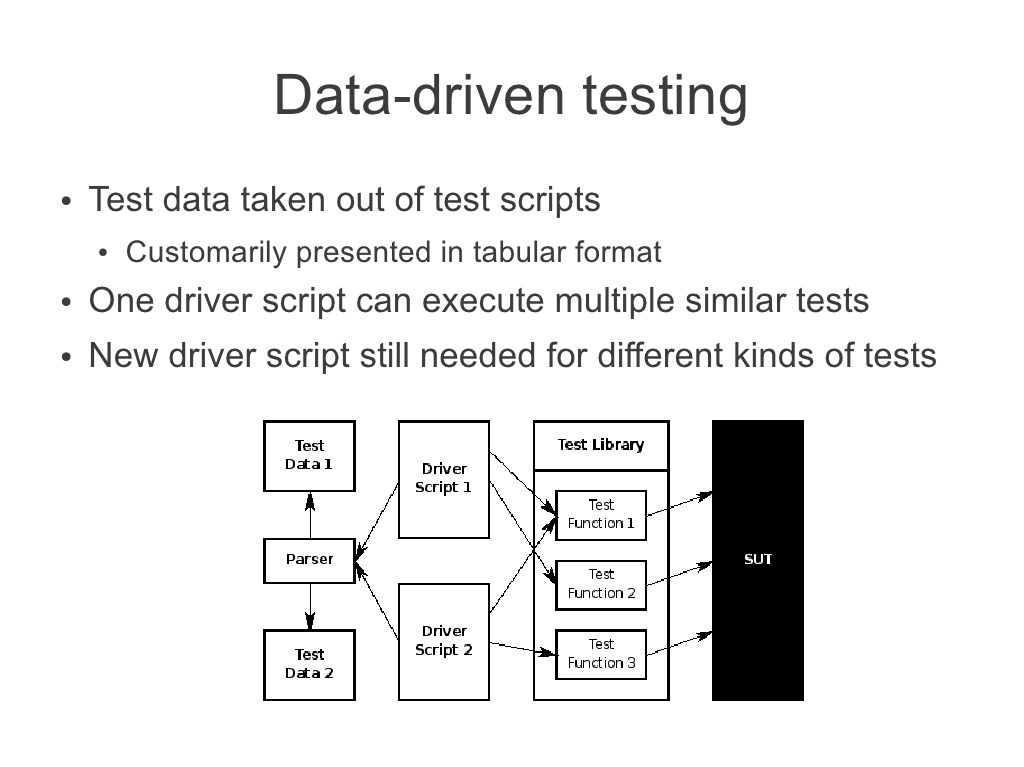 Data-Driven frameworks are mostly used after a different type of automated test has been completed on the software. This is because other automated tests cannot separate the data before testing. Some software works appropriately at first, but once users start uploading data such as text, audio, video, documents, etc., the software may begin operating abnormally.

This abnormality may increase as the software processes more data. That's why a Data-Driven automation testing framework is fundamental. Data is simply what makes any software usable, and the ability to test a software behavior with and without information is critical.

Data-Driven frameworks also can replicate or multiply the data being tested in software. It is a flexible framework because both the data stored externally and the codes that make up the software being tested can be manipulated to fit different scenarios, depending on what the end-users might experience when the software is eventually launched.

However, the database is separated. Some keywords related to the functions of the software are also arranged in an external system.

How Do You Implement Keyword-Driven Testing Frameworks? 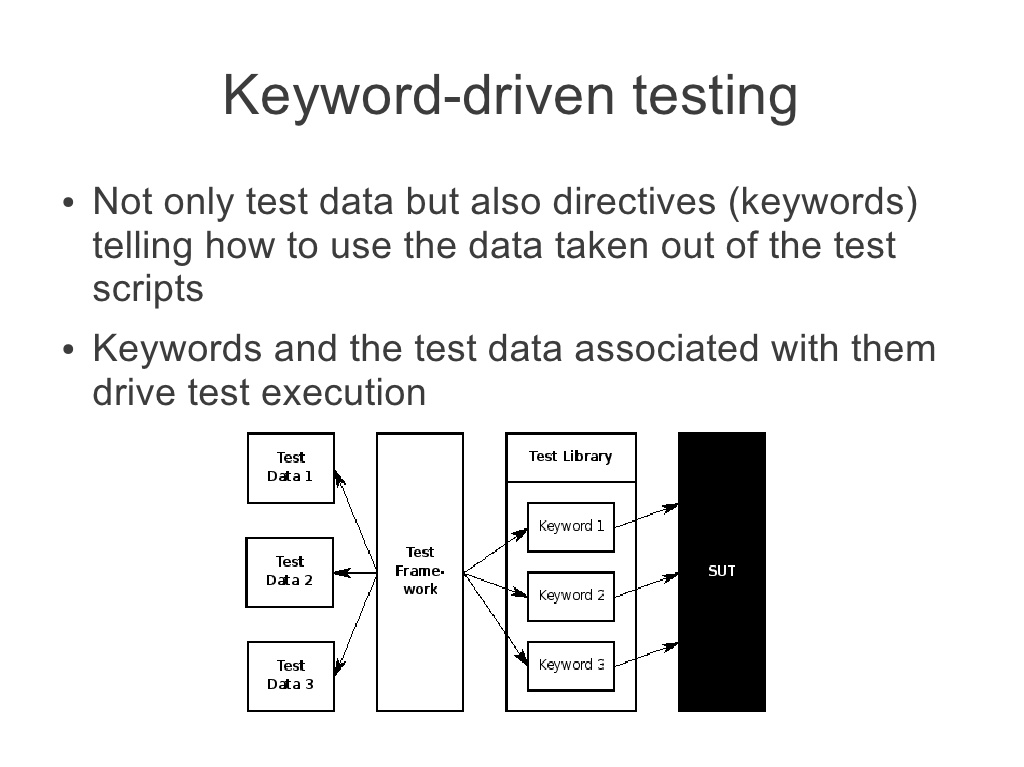 The keyword-driven framework is also similar to the library architecture framework. Such that the separated functions of the software are grouped into keywords. Each keyword contains identical functions. For instance, the keyword "input data" might include codes of the functions of logging in username and logging in password.

This automation testing framework is very flexible because testers can fiddle with each function of the software via its coding, and they can also manipulate the associated and anticipated data.

External data tables are used to store each keyword with its corresponding function, which can be called up for testing. Those who wish to adopt this automation testing approach have to be good with writing or editing codes.

How Do You Implement Hybrid Testing Frameworks? 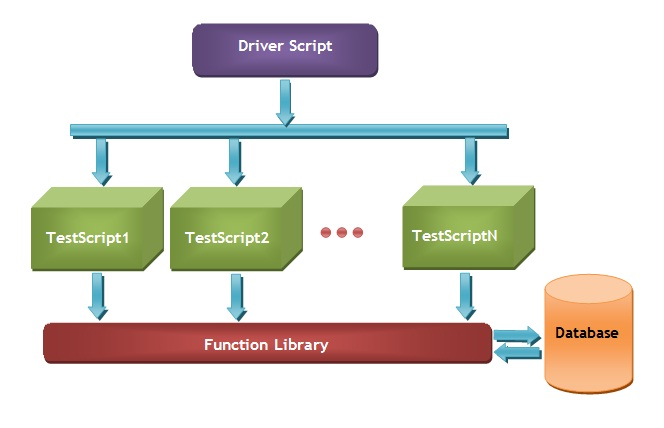 Hybrid testing frameworks are the most flexible to operate and can be set to become rigid, depending on the chosen testing approach.

Therefore, it is ideal for the human tester involved to have some form of experience with the other automation testing frameworks to be able to efficiently operate a hybrid framework that can be quite confusing to novice testers.

A hybrid framework lets you test any software over and over again, so if your company frequently launches unrelated software, it is highly advisable to go for a hybrid automation testing framework.

In conclusion, automation testing frameworks are the deciding factors when it comes to how well your software is tested. As stated earlier, they contain the various tools and capabilities to automate your software testing process successfully. Each software has the most suitable framework that will test it appropriately, and from this article, you can make the right choice when deciding on the framework to adopt.