What is system testing and its place among software testing levels

We’ve already told a bit about the software testing hierarchy. There are four levels of software testing: unit, integration, system, and acceptance. Each of these levels examines software at a certain stage – when separate components are coded, when they are assembled into features, and when features get united into a system, etc.

System testing comes after a QA team has checked the smallest functional blocks and their interactions. This time, we decided to focus on this type of testing with characteristics and particularities that make it essential.

What Is System Testing?

System testing is the inspection of a fully integrated system. The purpose of this checkup is to verify the system's conformance with both functional and non-functional requirements.

In the course of system testing, a QA team can notice the following defects:

System testing uses the black-box method. It means that a QA team doesn’t know how the backend works. They aren’t aware of the internal structure of software and check the features using frontend – the ‘facade’ of the program. This allows modeling user behavior closely since users interact with software in the same way. 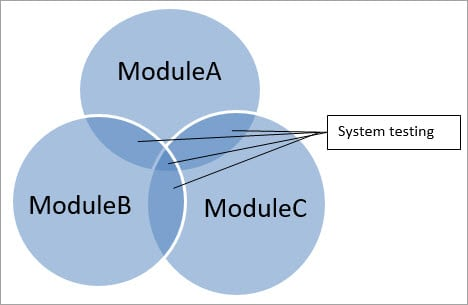 The goal of system testing is to minimize the risks associated with the behavior of the system in a particular environment. For this, testers use the environment as close as possible to the one on where a product will be installed after the release.

The objectives are some smaller steps that allow achieving the goal. In system testing, there are several milestones that make the release of a flawlessly functioning system (read: software without critical bugs on production) possible. So the primary objectives are:

The Differences Between System and Integration Testing 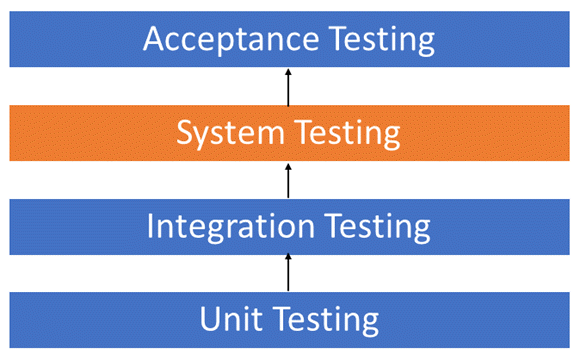 System testing goes further compared to integration testing. It inspects how all the units act after they become a wholesome system. As usual, the fact that units work as supposed after integration doesn’t mean they will function the same way in a system.

The Basis for System Testing

A test basis is the source of information that contains all the requirements for the software product under development. In other words, it is the documentation a QA team uses to draw conclusions on whether the product turned out to be the way it should be.

The basis for system testing should clearly define the criteria for features and performance. It should be well-structured so that finding relevant data for test case creation doesn’t cause any difficulties.

There are several documents that can be used as a testing basis, including:

There are two approaches to the system testing – one based on the requirements and the other one based on use cases. The former type uses project documentation as a set of main criteria for the inspection, while the latter aims to closely mimic user behavior.

Depending on the side that runs testing, there are alpha and beta testing. Both aim to find the bugs so that a dev team can fix them before the release.

You can find detailed information on some of them in our other blog posts. For now, here’s a short list with a short explanation to get familiar with the basics.

These are only several basic types of system testing required by different kinds of software products and provided by most QA companies. The final list for your product will depend on its specifications and your expectations.

How to Run System Testing?

If explained in detail, step by step system testing process requires one more post. Here’s a quick outline – system testing in a nutshell – to help you get the algorithm of this process. 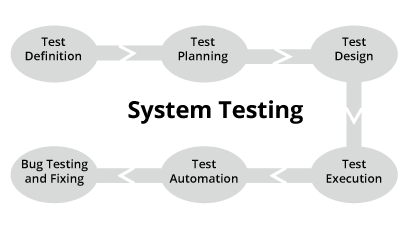 First, you need to create a test plan. After that, write the test and use cases. The next step is to create test data used for system testing. If you apply automation on the project, start with it. Then, run manual tests that cover the rest of the functionality.

The testing results are used to generate a report that goes to the development team. They are the ones who are going to fix bugs. Testers only run the inspection and suggest improvements. After the errors are fixed, run regression tests to make sure the untouched functionality hasn’t been affected. This last step can repeat several times until no critical bugs are left.

System testing is the third step in the hierarchy of software testing levels. It comes after integration testing and reviews a system as a whole.

During system testing, we work with a software build that is potentially ready for release. As a rule, there are still critical bugs that deteriorate user experience. The main task of a QA team at this stage is to find as many errors as possible so that the team can move on to acceptance testing – the next and final level in this hierarchy.