What is integration testing? The basics explained!

If you develop software, you surely aim to create a well-thought-out app logic and workable features to support it. Integration testing is an essential step on the way to releasing an app with thought-out logic and flawless performance.

The name suggests that during integration testing we examine the integration of different elements. What these elements are and why is it so important to verify their integrity – all in today’s post.

What Is Integration Testing?

Let’s start with a formal definition. Integration testing is a type of testing meant to check the combinations of different units, their interactions, the way subsystems unite into one common system, and code compliance with the requirements.

For example, when we check login and sign up features in an ecommerce app, we view them as separate units. If we check the ability to log in or sign up after a user adds items to their basket and wants to proceed to the checkout, we check the integration between these two functionalities.

For integration testing, the team uses components that have already been tested as separate units. A QA team groups these units into sets and checks them in accordance with the test plan.

Integration testing is performed using the black box method. This method implies that a testing team interacts with an app and its units via the user interface – by clicking on buttons and links, scrolling, swiping, etc. They don’t need to know how code works or consider the backend part of the components. 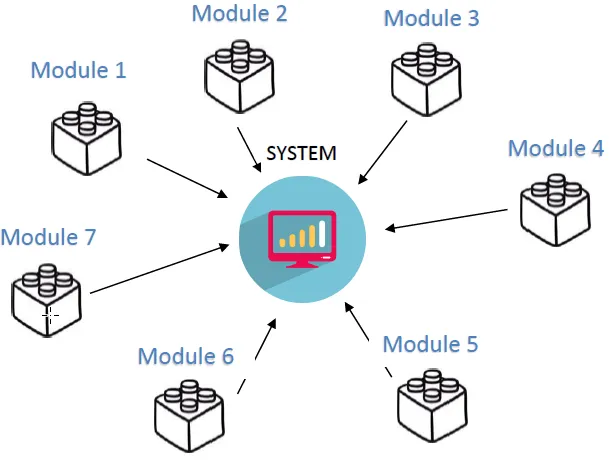 Differences Between Integration and Unit Testing 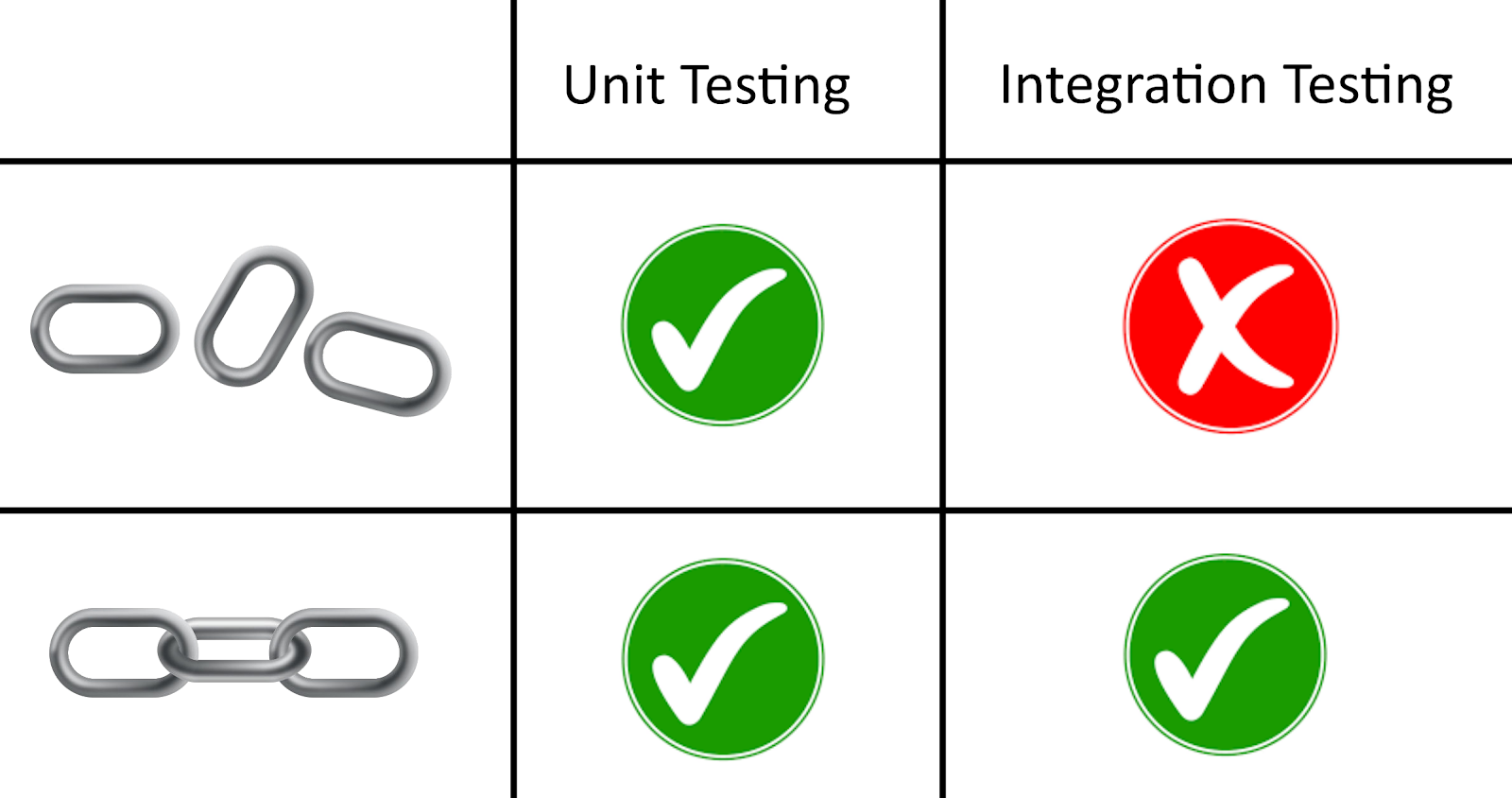 Integration testing and unit testing are two levels of software testing, where unit is the basic one and integration is the sequential one.

Unit testing implies checking the smallest functioning parts of code separately. Integration testing goes further: we look for errors that happen when units start interacting. The fact that units have successfully passed the tests at the previous stages doesn’t guarantee that they will work well together.

Therefore, any problems arising when we assemble several smaller parts into a subsystem can be associated with the particularities of the interaction between these units. The earlier we notice something abnormal, the lower will be the cost of a mistake.

Unit testing is the initial stage of the QA process. It prepares the functionality to the following stage which is integration testing. Without passing the former and verifying that units perform correctly, we cannot proceed to the latter and start putting them together.

If integration testing is the first chapter of the story (or the pilot of a TV show), unit testing is a prequel. As a rule, software engineers run unit testing at the earlier stages of product development.

Why Do We Need Integration Testing?

IT specialists are well aware of how unpredictable code can be, even if it seems perfectly written. Besides, there are dynamic projects, where pre-approved requirements can lose their relevance and change – that’s especially true for Agile projects.

The reasons for sudden changes in a project may be different. Sometimes requirements are poorly designed form the beginning, and software development reminds wandering in the dark. A team has to discover that something doesn’t match the project logic and adjust the features on the go.

Other reasons for sudden changes are:

Sometimes the reason for a change can be as simple as a productive brainstorming session. Sometimes a team suddenly finds a better idea on how to continue with the development and gets a green light. It happens because of new technologies emerging, new people joining the team, or just a sudden new perspective.

Let’s say, the changes aren’t very serious – just one feature modified. But this feature consists of several units – units that haven’t been tested individually or as an interactive system. In such a fast-paced environment, developers risk missing something. A QA team is their backup ready to find the flaws.

For example, we are testing an ecommerce app. Just before the release of a new build, a marketing department signs an agreement with a popular delivery platform that was frequently requested by users. This delivery method wasn’t mentioned in the initial requirements.

Developers can postpone changes for several weeks until the next sprint or implement the feature quickly, including it in the scope of tasks for the nearest sprint. So, the team needs to add one more option to delivery methods, tie several payment options for it, connect the platform’s API for order status tracking, etc.

The process starts from small steps: checking whether a new option appears on the list of delivery methods. The team needs to run a unit test to make sure it does. Then, we need to verify users can proceed to the next step after choosing this type of delivery. That’s integration testing.

Without either of them, we cannot be sure that this new feature works. Thus, there’s a chance that customers won’t be able to use a new delivery method a company has already started promoting.

Integration testing allows dividing code into blocks that consist of several units and check the parts of software gradually before assembling them all into a complete system. It means that all the systems will be properly revised, regardless of when, how, and why they have been created.

Verification of software integrity is essential since only functional and highly-performing build should be allowed to proceed to the further stages of testing. Otherwise, finding bugs will become more difficult and take more time.

If you need to outline the advantages of the integration testing in a nutshell, here they are:

When we speak about the types of integration testing, we usually mean different approaches to this level of software examination. There are five commonly used practices of effective integration testing. Let’s take a look at the basics, briefly outlining the pros and cons of each.

It starts at the lowest levels of software under test. QA engineers gradually move to the top of the hierarchy. We apply bottom-to-top testing when all units involved in the examination are ready.

This is the opposite approach. It starts with the top-level modules and moves down. If some units are not ready yet, we use stubs – units that act as a temporary replacement. They give the same output as the one you get in an actual product, so code becomes suitable for integration testing even with some elements still missing.

A QA engineer starts testing after all modules are assembled into a wholesome system or at least its major part. It means that integration testing starts when code writing is finished and the first version of a product is ready for the release.

It can be time-saving since a team doesn’t pause the development to check every unit. However, test cases should be flawless. Otherwise, decomposing a massive amount of code into units will just become a mess.

In this case, the logic of top-to-bottom and bottom-to-top approaches are integrated as much as possible. Thus, we get a hybrid model, where top units are tested separately, while low-level units are examined after the integration with upper-level units.

One more approach suggests more frequent checkups. A QA team examines integrated units after a development team finishes writing code for every new feature. In other words, after adding a new unit to a system, we pass its complete check.

If you are a tester, consider all the pros and cons to decide which approach suits your goals better. If you are a product owner, don’t worry about tech moments and let us decide on the approach. We can keep you updated about the details like this if it is helpful in any way.

We’ve told a lot about how integration testing works and what advantages it brings. As usual, benefits come with some challenges. There are several factors that can make integration testing more complicated than you expect. Here are some examples of such situations:

How to Do Integration Testing?

There is a simple algorithm a QA team can apply to run integration tests. Here is what the sequence of our actions typically looks like:

Let’s say, you have a fitness app with personalized training and meal plans. We won’t go into details regarding functionality. The core features of a similar app are:

At the initial stages of product testing, the team develops user registration and authorization logic. These are pages with forms for entering login and password or signing in via social media accounts.

After passing verification successfully, a first-time user should be redirected to the page that requests entering certain personal parameters for customization. If the flow appears to be different, there is an error in the system. To find and fix this bug, we run integration tests.

These are only some of the widely used tools you can see on the majority of popular lists. There are also Rational Integration Tester, Protractor, Selenium, and many more programs that simplify integration testing and boost its efficiency.

The choice of a tool depends on the programming language, payment options, project specifications, and tester’s preferences.

Integration testing is the second step in the hierarchy of testing levels. Following unit testing, it introduces a more complicated task for a QA team: to examine how separate units work together and whether they work at all.

Integration testing allows detecting bugs at the early stages, thus reducing the cost of an error and accelerating product delivery. And if you decide to skip this part, you risk missing a critical bug that will deteriorate user experience or make you reschedule the release date.